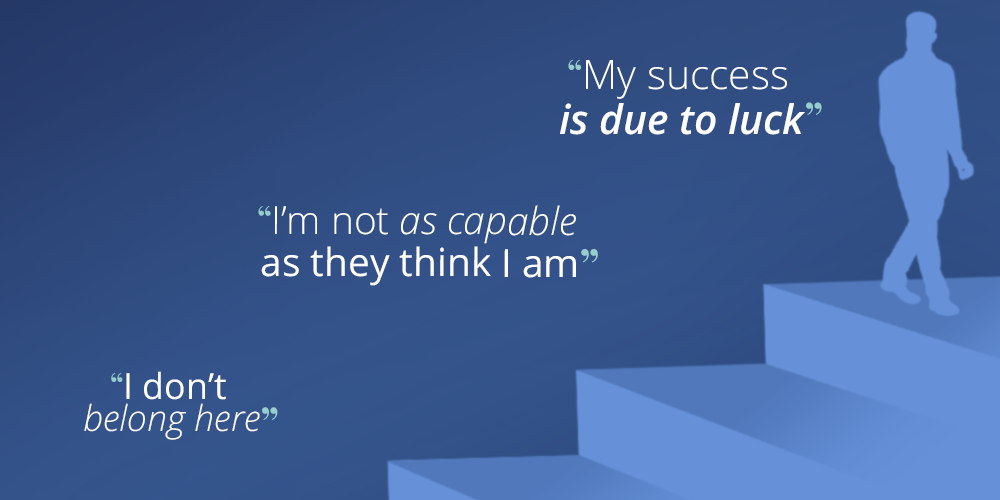 Imposter Syndrome – why do highly successful people feel like frauds?

Working for a top tier investment bank, a big four management consultancy or a global tech giant is seen by many as being a dream job. When you’re on the outside looking in, who wouldn’t want to work for a company that has slick designer offices, featuring state-of-the-art gyms and staff kitchens that cater to your every whim, free of charge? However, anyone who has worked in such an environment, will readily confirm that the psychological landscape that unfolds within those gilded walls, isn’t always easy to navigate.

In this article, we’re going to explore the rise of Imposter Syndrome and how many of today’s top executives are turning to clinics like ours, in the hope of recapturing a sense of authentic meaning and purpose through the career of their choice.

What is Imposter syndrome?

For a start, Imposter Syndrome isn’t a mental illness as such – it’s more of a psychological pattern that presents itself through lingering feelings of doubt and insecurity, despite the fact that a person is highly accomplished and talented in their field of expertise. People who experience this syndrome will attribute their success to luck or fate, turning a blind eye to their own hard work and/or merit. Perhaps one of the best quotes that indicates this syndrome is by Maya Angelou, who says “I have written 11 books, but each time I think, ‘Uh oh, they’re going to find out now. I’ve run a game on everybody, and they’re going to find me out.’”

Ultimately, the origins of this syndrome are often linked to early childhood, where a person grew up in an environment that encouraged or rewarded high achievement. A child is conditioned to believe that clocking up external achievements is a way to gain a parent’s love and affection.

By working with a psychologist , it’s possible to uncover the underlying belief system that not only keeps the syndrome in place, but perpetually brings about life situations that constantly reflect these beliefs back to the person in question.

Exploring your locus of control

One thing we may do in sessions with you, is gain an understanding of how your locus of control operates. Locus of control refers to how your belief system attributes the factors that lead to success or failure.

Some people will have an internal locus of control, while for others, it will be external. People who expect success due to their own efforts are more likely to be motivated and achieve what they set out to do. These people have an internal locus of control. They will likely be high achievers, and if there are no competing beliefs (as we’ll explain below), they will usually be satisfied with the results their life is generating.

People who have an external locus of control, attribute their success to luck or fate, and are generally found to be less likely to put in the effort required to achieve the career of their dreams.

It’s important to realise an internal or external locus is neither good or bad – they simply indicate different ways of being. However, exploring one’s locus in combination with other beliefs, will often provide clues to determine the source of a person’s difficulties.

Tackling the cause, through studying Cognitive Dissonance

Pop-psychology and self-help books, will often discuss the need to boost self-esteem and feelings of self-worth. By improving self-esteem through positive thinking and affirmations, a person can often combat some of the doubtful feelings of a phenomenon like Imposter Syndrome. However, it’s usually not that simple. By working with a clinic like ours, we’ll be able to identify the internal Cognitive Dissonance that might be causing the syndrome in the first place.

Cognitive Dissonance causes psychological discomfort due to the fact that a person is holding on to two or more contradictory beliefs, ideas or values at the same time. Let’s take the example of a person who has a fundamental underlying belief that they’re ‘not good enough’. This belief coupled with an internal locus of control might have that person working harder than everyone else. Because they believe success is down to their efforts, they might work back late every day, and they may feel the need to constantly check and re-check their work.

In another example, a person with an external locus of control, might have an underlying belief that they are only ‘loveable if they achieve great things’. Their drive to keep pushing themselves forward might stem from a need to gain love and appreciation, however, an external locus belief that they are merely ‘lucky’, might prevent them from ever enjoying their success and appreciating the love that may already be present in their lives. Research suggests that those who have external locus beliefs are more likely to feel Imposter Syndrome to a greater degree.

Change your viewpoint, not the job

Schema therapy is a very useful modality to help identify the underlying beliefs that could be causing uncomfortable feelings or mental states. This integrative approach combines cognitive behavioural methods and a range of psychoanalytic therapies into one comprehensive model.

This therapy works for those people who have long-standing patterns or themes that colour one’s thinking. For example, while some people are said to wear rose coloured lenses, so that they see everything in a positive light, people who benefit from schema therapy might see everything through the lens of ‘I’m not good enough’ or ‘people can’t be trusted’. By accurately identifying and neutralising a distorted lens, people can regain a healthy appreciation of their life and their natural place within it – which results in happier relationships and a greater satisfaction for life as it is.

We’ve helped countless people who have struggled with the uncomfortable mental states that arise from Imposter Syndrome. If you would like to discuss how we can help, then please do contact us for a confidential chat.

What are the signs of ASD?

What are the different types of eating disorders?

How do psychologists differ from psychiatrists?